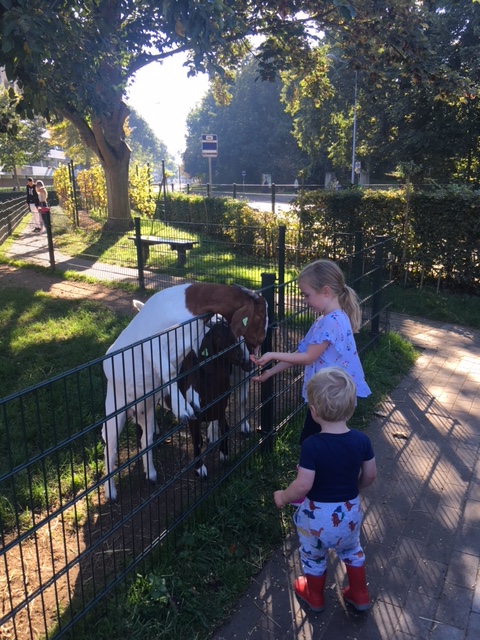 What a week! Thank God it’s almost vacation, Jaap and I have 48 hours alone in Den Haag (!!!!!!!!!!!!!!!!), and I’m drinking a delicious coffee right now. It’s been quite a week! Wednesday pushed me to the brink of Mommy insanity. Thibault has been having some weird nights. Up for two hours (?!?!?!?) in the middle of the night, crying a lot, being somewhat hysterical in the morning. I don’t get it. I’m starting to see more and more how frustrated he is from not being able to communicate with words. (We’re starting speech therapy in two weeks and I’m already relieved that it’s finally happening).

So after Thibault’s nap (which was a little bit shorter than normal) we had time for an outing. Of course Flora was resistant, but I decided I was not going to let the mood of a five year old ruin my momentum. We went to the kinderboerderij for some outdoor play and animal therapy. Feeding the goats, petting some sheep, looking at all the animals playing, and taking a turn on the speeltuin put everyone at ease. I felt much better.

On hard days like these, my moment of zen is listening to Democracy Now! with Amy Goodman, my female journalist hero, alone in my kitchen while preparing dinner. Even a moment of zen involves multi-tasking, but at least I was alone! My crying children were with Jaap (my other hero) and I had time to sip some wine in peace.